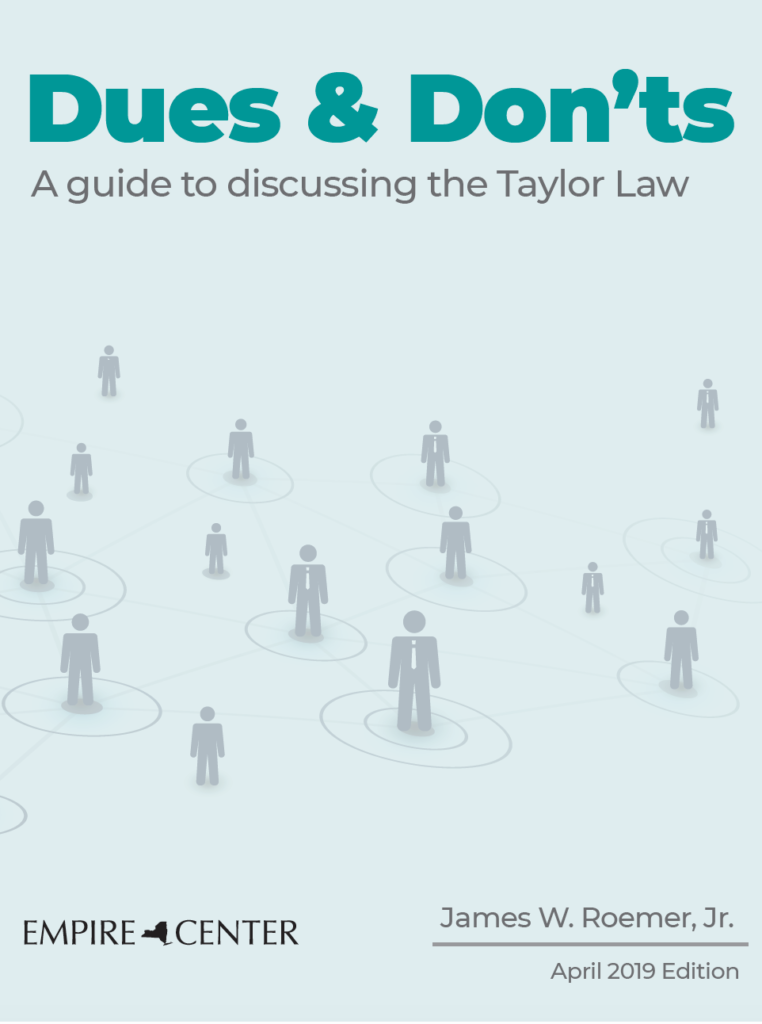 This manual is intended to help New York public employers understand four key points relating to their rights and responsibilities under the Taylor Law in the wake of the Supreme Court’s Janus v. AFSCME ruling.

Those points are as follows:

Each of the following sections includes recommended actions for public employers. Relevant statutes and caselaw are cited throughout, frequently asked questions are answered, and sample materials are provided.

Employers can talk to their employees about collective bargaining issues—including union membership and Janus rights.

Employers have the right to communicate with employees and prospective employees on their terms and conditions of employment as long as the communication is not coercive with respect to the employees’ rights to join or participate in a union. Communications should be statements of fact that advise the employee of his/her rights and options. This communication can occur:

Given the possibility of being charged with an improper practice under CSL §209-a.1 (a), (b), (c) or (f), some public employers may feel overly constrained in their communications with their employees regarding issues such as agency fees, the Janus decision and the 2018 Taylor Law amendments, not to mention the law itself. Such trepidation is misplaced. It is only communication by public employers that is intended to interfere, restrain, discourage or coerce from exercising rights to join, form or participate in unions that could form the basis of an improper practice charge. Providing employees, even employees represented by a union, with factual information in a non-coercive, non-threatening manner does not violate the law.

Most notably, employers may notify employees (pre-hire and current) specifically about Janus rights. The Janus decision makes the issue of agency fee arrangements a prohibited subject of bargaining, so discussing the commonly accepted implications of the decision cannot constitute a violation.1 An example of a permissible notification letter can be found here.

Furthermore, informing employees of changes in law in a factual manner does not constitute a “direct dealing,” another prohibited practice, as a direct dealing charge requires negotiating with an employee for the purpose of reaching an agreement.2

Posting the collective bargaining agreement (CBA) between a public employer and a public employee organization online may alleviate some confusion. The CBA is a public document subject to the NYS Freedom of Information Law (Public Officers Law §84, et seq.) and should not be shrouded in secrecy or confidentiality. PERB’s rules (4 NYCRR 215.1) require that each public employer provide to PERB a copy of any negotiated CBA under CSL § 205.5 (e). For many years, PERB has made these available online.

Improper employer practices. It shall be an improper practice for a public employer or its agents deliberately (a) to interfere with, restrain or coerce public employees in the exercise of their rights guaranteed in section two hundred two of this article for the purpose of depriving them of such rights; (b) to dominate or interfere with the formation or administration of any employee organization for the purpose of depriving them of such rights; (c) to discriminate against any employee for the purpose of encouraging or discouraging membership in, or participation in the activities of, any employee organization; (d) to refuse to negotiate in good faith with the duly recognized or certified representatives of its public employees; (e) to refuse to continue all the terms of an expired agreement until a new agreement is negotiated, unless the employee organization which is a party to such agreement has, during such negotiations or prior to such resolution of such negotiations, engaged in conduct violative of subdivision one of section two hundred ten of this article; (f) to utilize any state funds appropriated for any purpose to train managers, supervisors or other administrative personnel regarding methods to discourage union organization or to discourage an employee from participating in a union organizing drive; (g) to fail to permit or refuse to afford a public employee the right, upon the employee’s demand, to representation by a representative of the employee organization, or the designee of such organization, which has been certified or recognized under this article when at the time of questioning by the employer of such employee it reasonably appears that he or she may be the subject of a potential disciplinary action. If representation is requested, and the employee is a potential target of disciplinary action at the time of questioning, a reasonable period of time shall be afforded to the employee to obtain such representation. It shall be an affirmative defense to any improper practice charge under paragraph (g) of this subdivision that the employee has the right, pursuant to statute, interest arbitration award, collectively negotiated agreement, policy or practice, to present to a hearing officer or arbitrator evidence of the employer’s failure to provide representation and to obtain exclusion of the resulting evidence upon demonstration of such failure. Nothing in this section shall grant an employee any right to representation by the representative of an employee organization in any criminal investigation; or (h) to disclose home addresses, personal telephone numbers, personal cell phone numbers, personal e-mail addresses of a public employee, as the term “public employee” is defined in subsection seven of section two hundred one of this article, except (I) where required pursuant to the provisions of this article, and (II) to the extent compelled to do so by lawful service of process, subpoena, court order, or as otherwise required by law. This paragraph shall not prohibit other provisions of law regarding work-related, publicly available information such as title, salary and dates of employment.

Union dues should be deducted only for employees who have signed dues-deduction authorizations.

Most payroll systems came online after New York State-mandated agency-fee collection for local governments and school districts in 1992, meaning there was no immediate need to differentiate between dues-paying union members and non-members (agency-fee payers). In the leadup to Janus, a review by the Empire Center found nearly three in four public employers could not make this distinction, and that many were deducting dues without first having been presented with a dues-deduction authorization card.

If an employee has not signed a dues-deduction authorization card, dues should not be deducted from his or her pay.

Now that New York State requires public employers to enforce the terms of dues-deduction authorization cards (see section 3, page 6), it is more important than ever that employers possess them. The public employer should review the terms to determine whether they place any burden or responsibility on the employer (e.g. to escrow funds). Since it is unlikely that the union will agree to defend and indemnify the employer from any actions arising from disputes between the member and the union, the employer may want to consider alternate language as a bargaining subject. If a union submits new authorization cards, the employer cannot refuse to acknowledge them on minor technical deficiencies.3

Changes made to the Taylor Law since 2018 imposed new obligations on New York’s state and local employers.

Ahead of the Janus ruling, Governor Andrew Cuomo and the state Legislature modified long-standing state laws to benefit government unions. Additional changes were made in the FY2020 state budget.

As explained in the previous section, the employer is now charged with enforcing the membership-dues deduction agreement. If a signed card is not possessed, however, it is impossible for the employer to follow the law.

The public employer also should be aware of a new statutory requirement to provide information to the union about newly hired, promoted or transferred employees and to provide a union representative with the opportunity to meet with such employees for a reasonable amount of time.

The state Legislature amended CSL §208 to:

(b) Within thirty days of providing the notice in paragraph a of this subdivision, a public employer shall allow a duly appointed representative of the employee organization that represents that bargaining unit to meet with such employee for a reasonable amount of time during his or her work time without charge to leave credits, unless otherwise specified within an agreement bargained collectively under article fourteen of the civil service law, provided however that arrangements for such meeting must be scheduled in consultation with a designated representative of the public employer.

Agency fees or similar payments and deductions are unconstitutional.

Writing for the majority in Janus, U.S. Supreme Court Justice Samuel Alito wrote, “Neither an agency fee nor any other payment to the union may be deducted from a nonmember’s wages, nor may any other attempt be made to collect such a payment, unless the employee affirmatively consents to pay (emphasis added).”

Many collective bargaining agreements contain express language recognizing an “agency shop.” An example of such contract language is as follows:

Since this provision is now unconstitutional and thus unenforceable,4 it should be removed from the collective bargaining agreement. Most unions understand this and will agree to remove such language.

Soon after Janus was decided, Assemblyman Richard Gottfried of Manhattan signaled he would introduce legislation to help unions “overcome” the court’s decision by permitting direct subsidies to the unions in lieu of agency fees. Such arrangements, if pursued, would also be constitutionally suspect and should be avoided.

About the author: James W. Roemer, Jr. is in his 50th year of practicing public-sector labor law in New York. He served 17 years as Counsel to the Civil Service Employees Association, Inc. (CSEA) and is the founding and senior partner in the law firm of Roemer, Wallens, Gold & Mineaux, LLP. For the past 33 years, Jim and his firm have served as labor counsel to more than 50 public employers across New York. As a result of his knowledge and experience, Jim’s peers have given him the highest possible ratings for both legal knowledge and ethical standards, making him a uniquely qualified resource.